That really is the question.

People are talking. About pubes. Yes, really. Cameron Diaz caused a furore last year when she came out publicly in favour of keeping hair down there. The actress, and former model, covered the topic in her hugely popular health manual The Body Book with a chapter entitled “In Praise Of Pubes”. In an appearance on The Graham Norton Show she went on to say that she was very concerned with the growing trend of young women undergoing laser hair removal. She has a point. Laser hair removal is permanent. Once it’s gone, it’s gone forever.

A few months ago Channel 4 aired a documentary entitled Sex In Class. Belgian sexologist Goedele Liekens (my new girl crush) visited a school in Lancashire to hold sex education classes with 15-16 year olds. In one of the lessons she put up large posters featuring female genitalia and asked the boys which one they preferred. The vote was unanimous, they liked the hairless one. One boy went as far as to say he’d ditch a girl if she refused to shave her pubic hair off. It became apparent that these boys were learning about the female anatomy from porn. It was also obvious that they were clueless but that’s schoolboys for you.

Doctors are seeing increased numbers of infection and sexually transmitted disease, which they’re saying is all down to lack of pubic hair. It would seem to be there for a reason. Men regularly cite their preference for waxed lady parts as being “because it’s cleaner” but it would appear that isn’t the case. Trust me, I googled it.

Terms such as The Brazilian (think landing strip) and The Hollywood (everything gone!) entered our vocabularies. Bald nether regions became the norm and there was money to be made. A whole host of products are available to help you get rid of your “unwanted hair”.

This topic has come up with friends over the years and I can’t remember any of them saying they don’t do some kind of ‘maintenance’. In my early 20’s I flat-shared with a gorgeous Greek girl. We obsessively watched Sex and the City together (as well as The West Wing for Rob Lowe but I digress…) and it always prompted discussion into the early hours, usually fuelled by ice cream. She was appalled by waxing. She insisted her swarthy Mediterranean boyfriend would be incensed if she were to wax. She’d wrinkle her nose in disgust “He’d feel like he was with a child”.

Speaking of Sex and the City, who can forget the now infamous “weed whacker” scene. Samantha (Kim Cattrall) has intimate relations with a man who then suggests she goes for a wax. “It’s my week between waxes, I had three errant hairs and this asshole thinks I’m George Of The Jungle! And you should see the bush on him, I’d need a weed whacker just to find his dick!”. Crass I know, but it lead me to thinking, what do men, and women, really prefer? So I did what any normal well adjusted person would do. I asked Twitter.

I put up a simple 24-hour poll on my Twitter profile, one for men and one for women. I asked what they preferred, giving four options ranging from ‘as nature intended’ to completely hairless.

Now obviously this small survey is just that. Small. 210 people voted in the male poll and only 127 took part in the female one. Don’t take this terribly seriously. There are holes in this research. Gaping ones. If Billy Bob Thornton were here he’d look at the holes in my data and say “It’s the size of Texas, Mr President”. But as a little glimpse it’s quite interesting if not all that surprising. 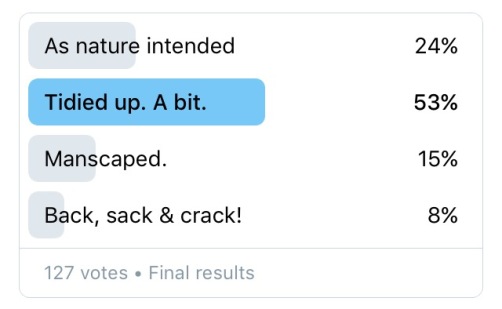 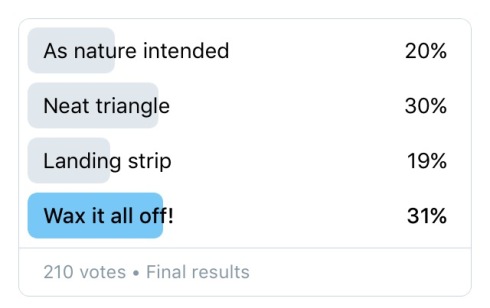 Women primarily wanted their man to stay pretty much as he was, with 24% selecting “As nature intended” and a whopping 53% choosing “Tidied up. A bit.”. Only 8% of those surveyed would like their man to wax it all off.

Whilst there was a clear favourite in the female poll, the results were more evenly split in the male one with 30% of men choosing “A neat triangle” and 31% opting for “Wax it all off”.

So there you have it. Of course there is no right or wrong answer. What you choose to do with your body is up to you. And God knows there are a wealth of options open to you. If you so desire you can dye your pubic hair and shape it, a red heart for Valentine’s Day perhaps? There’s also tattooing, piercing, merkins, vajazzling… the list is endless!

Will pubes make a comeback or is the waxing, trimming, shaping here to stay? Only time will tell.

For now I’ll just leave you with a picture of Rob Lowe from when he was in The West Wing. Just because.